The Arts and Humanities Research Council (AHRC) was established in 2005, when it replaced the Arts and Humanities Research Board. The AHRC is publicly funded by the Department for Innovation, Universities and Skills, and is the major funding body with responsibility for research in Film and Television Studies in higher education institutions (HEIs) the United Kingdom. While the AHRC makes available statistics for awards and submissions by its core themes and HEIs, it does not provide a subject-by-subject breakdown. Nor does it provide data at the level of the twelve government office regions of the UK, or by university consortium, or by gender. This survey presents an analysis of funding for postgraduates and academics in Film and Television Studies in these terms using publicly available data taken from the AHRC website [1].

Awards to postgraduates in Film and Television Studies from 2003 to 2008 were made in three categories:

The AHRC has changed the way it allocates postgraduate funding from 2009. Block Grant Partnership (BGP) studentships are now awarded at an institutional level, with responsibility for allocating support at the departmental level now in the hands of universities that hold the funding. HEIs that do not hold BGP funding are eligible to enter postgraduate students into a studentship competition that functions in a similar fashion to the previous open competition. 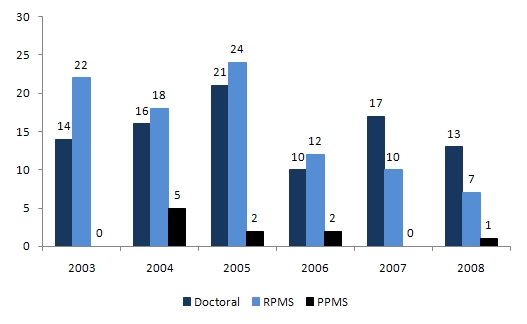 Figure 1 AHRC postgraduate awards in film and television studies by funding category, 2003 to 2008

Postgraduate awards were made to a total of 36 institutions (including several colleges of the University of London) – a fraction of the 169 HEIs in the UK that were open in August 2008 and eligible to apply for funding during the time period covered. The number of postgraduate awards by funding category for each institution is given in Table 1. Two universities  – the University of East Anglia and the University of Warwick – have considerably more awards (31 in each case) than the other institutions, and are the only HEIs to achieve doctoral awards in double figures (13 and 10, respectively). Only four other institutions achieve double figures in total (King’s College London and the Universities of Exeter, Glasgow, and Nottingham). There are eleven institutions with a single award only for the six year period covered by the data. 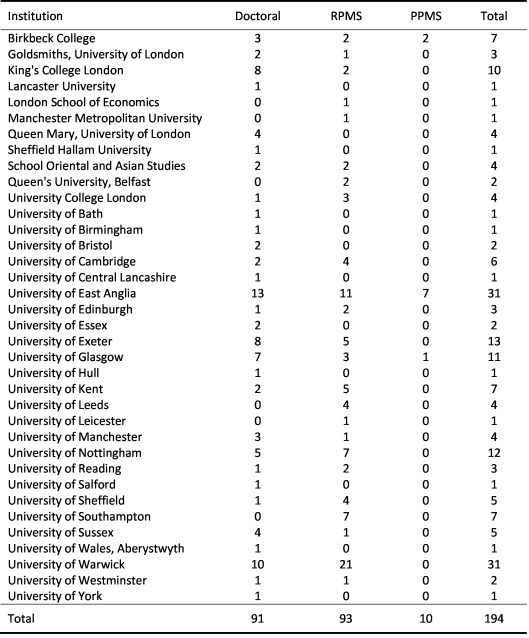 Of these 36 institutions, 15 are part of the Russell Group of research intensive universities, 13 are members of the 1994 Group, 5 are members of the University Alliance, 1 is a member of Million+, and 2 are not aligned with any consortium. The 28 universities of the Russell and 1994 Groups of research intensive universities account for 92.27 per cent of the total number awards. Postgraduate awards by university consortium are presented in Figure 2.

Figure 2 Percentage of AHRC postgraduate awards in film and television studies by university consortium, 2003 to 2008

The regional distribution of AHRC postgraduate funding is concentrated in the South East of England and the West Midlands, although this is largely due to the extraordinary impact a single institution can have on the regional figures. For example, the West Midlands accounts for 32 out of a total of 194 awards (16.5%) – but of these, 31 are accounted for by the University of Warwick, with a single award to the University of Birmingham. Similarly, of the 39 awards made to HEIs in the East (20.1%), 31 were to the University of East Anglia, 6 to the University of Cambridge, and 2 to the University of Essex. The North West and Yorkshire and the Humber have a greater number of HEIs (five in each case) but receive fewer awards – 4.1% and 6.2%, respectively. The North East received no awards, while the figures for Northern Ireland (1.0%) and Wales (0.5%) are negligible and represent awards to a single HEI in each case. A regional breakdown of the distribution of postgraduate funding is presented in Figure 3.

Figure 3 Percentage of AHRC postgraduate awards in film and television studies by government region, 2003 to 2008

The total amount of research funding in film and television studies has generally increased over the period 2003 to 2008 (see Figure 4). Researchers bidding for funding under the Research Grants (Standard) programme have achieved some significant success in for projects that cover wide-ranging topics such as early colour cinema, the films of Lindsay Anderson, and the social geography of cities on film. After a decline, the level of funding for Research Leave has returned to its 2003 level over the past couple of years. The Small Grants programme made a small, if important, contribution before closing in 2005; but apart from a single fellowship and one award for resource enhancement there has been no extra funding for these subjects.

Figure 4 Value of AHRC research funding in film and television studies by funding category, 2003 to 2008

Forty-three HEIs received some funding, though the level of that funding ranges from as little as £2,246 to as much as £418,827, with a median of £34,728 (Table 3). Most institutions (23) received only a single award over the period covered, while six were successful on four occasions. However, the scale of the award varies enormously: the University of Surrey was successful in winning £418,827 for a single research project in 6 years, while researchers at the University of Sussex received £34,889 across four awards.

Figure 5 Percentage of AHRC research funding in film and television studies by university consortium, 2003 to 2008

The regional distribution of funding for Film and Television Studies by the AHRC makes for stark reading. Five regions (North East, Yorkshire and the Humber, East Midlands, East, and Wales) received less than 2.5% of research funding each, and Northern Ireland received no funding. These six regions account for only 9.0% of the total funding allocated. Scotland has received a healthy proportion of research funding (13.1%), but this is to be accounted for research grants to only two HEIs (the universities of Glasgow and Stirling). The West Midlands received 8.1% of total funding, although most of this may be accounted for by single Research Grants (Standard) award to the University of Warwick. Similarly, the £377,188 awarded to the University of Liverpool accounts for most of the North West’s allocation (10.9%). Universities in the South East and South West have been very successful in attracting funding for Research Grants (Standard) and this accounts for their leading positions in the country – of a total of 11 eleven such grants, these regions accounted for 6 (3 apiece) and a total of £1,338,770. In fact both these regions eclipse London, which accounts for 14.0% across 13 HEIs. Figure 6 shows the regional distribution of research funding in the UK.

Figure 6 Percentage of AHRC research funding in film and television studies by region, 2003 to 2008

Overall, the number of research awards is slightly higher for male researchers than for female but the gender disparity evident in the postgraduate awards is not replicated (see Table 4). For Research Grants (Standard) the data refers only to the named applicant in the database, and so it does not reflect the total number of staff who may be employed on a specific research programme. However, this data does provide a means of identifying the gender of the senior researcher who has managerial control programme, and from this perspective there has been a significant bias to male researchers over the period covered here. The four projects with headed by female researchers were all awarded in 2007 and 2008, with no such funding allocated from 2003 to 2006. In 2007 and 2008, only one award was made to a programme headed by a male researcher under the Research Grants (Standard) programme.

Table 4 Number of AHRC awards in film and television studies by gender, 2003-2008

Table 5 Value of AHRC awards in film and television studies by gender, 2003-2008

From 2003 to 2008, the AHRC allocated substantial funds to researchers and postgraduates in Film and Television Studies, but there are some important questions that remain to be answered.

These are questions that the AHRC must address, but perhaps most importantly, they are issues that must be debated by film and media scholars in the UK as a whole. Unfortunately, there does not appear to be a forum in which such issues may be presented. A limitation of this survey is the short time span (only six years) and only a single source of funding is covered, but it has been my intention to raise a range of issues that can be further explored with a view to developing research in Film and Television Studies in the post-RAE environment.