← The ontology of games
The geographies of cinema →

Some Notes on Shot Scales

In some earlier posts (here, here, and here) I looked at the use of rank-frequency plots and linear regression for describing changes in the use of shot scales in Hollywood and German Cinema (as well as some other countries), and of various filmmakers, up to the 1930s. This post follows those up with some more plots that look at Hollywood cinema in the 1959 and 1999 using data from Barry Salt’s database (which can be accessed here). The articles in which Salt discusses style in these years are Salt (2004) and Salt (2009).

Shot scale data was collected for films listed as 1959 and 1999, giving a total of 19 films in each sample. North by Northwest was not included in the 1959 as the sum of the normalized values was 510. This data was then sorted by rank and the mean relative frequency of each rank calculated. The mean relative frequency was then plotted against the rank, and a linear trend-line fitted to the data. The rank-frequency plot for 1959 is presented as Figure 1 and for 1999 as Figure 2. In addition to this, the sample medians for each shot scale were calculated and are presented along with the minimum and maximum values in Table 1. The sample medians for 1959 are presented in Figure 3 and for 1999 in Figure 4.

FIGURE 1 Rank-frequency plot of shot scales for Hollywood films from 1959. The error bars are the 95% confidence interval.

FIGURE 2 Rank-frequency plot of shot scales for Hollywood films from 1999. The error bars are the 95% confidence interval.

Rank-frequency plots are useful only up to a point, due to the loss of information ranking the data. If we want to know which scale is the most dominant then, we need to look at that data directly (see Table 1, and Figures 3 and 4).

Looking at the 1959 data we can see that (as in the 1910s, 1920s, and 1930s) big close-ups and very long shots occur much less often than other scales. Unlike those earlier films, we can see that across the range from close-ups to long shots there is a much more uniform distribution. This suggests that whereas before it was medium long shots or long shots that were consistently the first-ranked scale, here we have a more even distribution of the first rank: of the 19 films in the sample the most frequently occurring (i.e. first ranked) scale is the close-up in 11 films, the medium close-up in 2 films, the medium long shot in 3 films and the long shot in 3 films. We can see, then, in the 1959 films a shift to the greater use of close-ups than in the 1930s.

Looking at the 1999 films, we can see that close-ups have become the dominant shot scale in a similar manner to the dominance of long shots in the pre-classical era. Very long shots are still rare, but big-close ups have become more frequent. Of the 19 films in this sample, 4 films had the big-close-up as the first ranked scale, while 15 films have the close-up as the most frequently occurring shot scale. 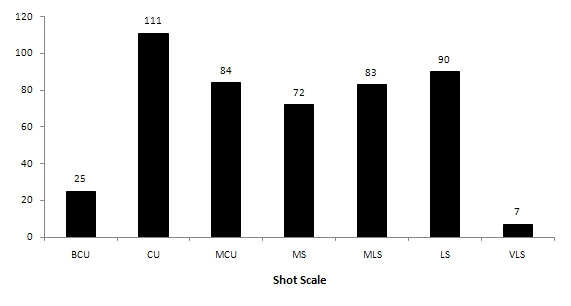 Although based on two years that are far apart, when combined with the earlier data we can see a trend from pre-classical to contemporary cinema that is characterized by two features. First, there is a shift from a non-linear rank-frequency plot of pre-classical Hollywood cinema to the linear plot of classical Hollywood cinema to the non-linear plot of contemporary cinema. This indicates that we have moved from a film style in which one shot scale was dominant over others to one in which there is no clearly dominant scale and then back to the dominance of a single scale. Second, the dominant scale has changed from the long shot of pre-classical era to the close-up of contemporary cinema, having passed through the classical phase when medium shots were more common.

That the shift to close-ups appears to be underway by 1959 indicates that this shift in the use of shot scales is already underway. As this data is well described by the linear model, it is not that far removed from the 1930s but the increasing frequency of close ups would indicate that in this data salt has captured a transitional period in Hollywood style.

As the 1999 data appears to share characteristics with both pre-classical (the dominance of a single scale) and classical Hollywood cinema (the confidence intervals for the trend-line parameters are wide enough to include the classical films), we might think of it (albeit only tentatively) as being a hybrid of the two. Whether or not this could be classed as ‘post-classical’ or ‘intensified continuity’ remains to be seen.

← The ontology of games
The geographies of cinema →