The Top 100 in Three Countries

Data on the total and opening weekend (including previews) box office gross was collected from Box Office Mojo. Gross data on Box Office Mojo is given in US dollars, and – unless otherwise stated – to make direct comparisons between the different countries I have left this as it is and have not corrected the data to pounds and Euros. (To compare this UK data to that in earlier posts it is necessary to multiply the box office gross in US dollars by 0.65 to convert to pounds). To sort the data into groups, the opening weekend gross (including previews) and the total box office data were entered into PAST (v. 2.06) and then allocated by using k-means clustering into 5 groups. Data was missing for some films so the plots do not actually include the top 100 for each country: 3 films are missing for the UK data, four from Germany, and 2 from France.

The UK data is presented in Figure 1, and looks very like the plots of the box office grosses from earlier posts covering the period 2007 to 2009. We have two films (Toy Story 3 and Harry Potter and the Deathly Hallows (Part One)) that easily outperformed everything else. The black cluster includes four films (Alice in Wonderland, Inception, Shrek Forever After, The Twilight Saga: Eclipse) that are what we would expect to see in this part of the graph: they are the big budget Hollywood movies that dominate the UK box office. Note that four of the top six films are franchise movies. The red cluster is made up of 10 Hollywood films (e.g. Robin Hood, Iron Man 2, Little Fockers) that probably disappointed a little; British audiences are possibly a little tired on non-English Robin Hood’s (comedians have even stopped making jokes about the fact that he is never English) and they don’t appear to be over-enthusiastic about the Iron Man films. The character of Iron Man doesn’t have the same resonance with non-comic book readers as a Spiderman, Superman, or Batman, and so the premium derived from the prior source material is not as evident. It will therefore be interesting to see what happens to Green Lantern when it opens here on 17 June 2011, as this also does not have any major resonance for UK audiences – the best the producers may be able to expect is a red cluster rather than a black cluster film. The green group is also composed entirely of Hollywood films, with no UK films (other than those produced with US studios) making it into the top 40. This suggests that 2010 was a bad year for British cinema (if we don’t include Hollywood blockbusters as British). In fact, the green group is largely made up of Hollywood stinkers: Knight & Day, The A-Team, Tron Legacy, and The Expendables. The blue group contains 58 films, none of which grossed over $9.3 million ($6 million), and is the usual mixture of British films that made it into the Top 100 (Made In Dagenham, Tamara Drewe) and Hollywood films that performed very poorly (The Book of Eli, The Blind Side, The Last Airbender). The Book of Eli performed poorly in all three countries: it was the 64th highest grossing film in the UK, but only achieved a rank of 80 in Germany and 84 in France.

The mean gross values for the different UK clusters in US dollars and pounds is presented in Table 1. Note also that dividing the opening weekend gross of a cluster by the cluster above it (e.g. purple/black) is approximately 0.5. This is also true for the total grosses, except when dividing the total gross for the blue cluster by the green cluster, which produces a ratio of 0.4.

Table 1 Cluster size, and mean total and opening weekend grosses for the top 100 films at the UK box office in 2010

Turning to the data for Germany (Figure 2) and France (Figure 3), we see that the same clear pattern evident in the UK is not present. The clustering is fair less satisfactory (I have not altered the clustering produced by the software in the graphs used here). In part, this is because I am using the same approach of clustering into 5 groups that I used for the UK, and there is no reason to think that the clustering in on country should apply in another – in fact it’s fairly obvious from looking at Figures 1 and 3, that if we are going to use 5 clusters for the UK box office data we would be better off using four (or even three) for the top 100 films in France. Germany is probably OK with 5 clusters, but I think that the clustering results presented here could be improved by reclustering the data from the black and red groups to give a better breakdown. That said, it is nonetheless instructive to see how these two countries differ from the UK by using the method in all cases.

In Germany, Harry Potter and the Deathly Hallows (Part One) clearly outperformed every other film by some distance, but the differences between the other clusters are not so clearly marked as they are in the UK.The black cluster looks like it could be broken into two groups, with the 7 highest grossing films forming a single group while the remainder look as though they belong with the red cluster. The 7 highest grossing films in the black group all grossed ore than $24 million, while the remainder grossed between $18 and $13 million. These 7 films include franchise movies like Shrek Forever After and The Twilight Saga: Eclipse, along with blockbusters like Alice in Wonderland and Inception – but NOT Toy Story 3. The other 14 black films include big Hollywood films like Clash of the Titans, Sherlock Holmes, and Robin Hood; but also, and unlike in the UK and France where their performance was poor, Resident Evil: Afterlife and The Last Airbender. Included in the black group is Konferenz der Tiere, which at 20, is the highest ranked German film – its animated film released in English as Animals United. The red cluster is made up of the same type of films as the lower 14 black films – the type of Hollywood films that dominate the box office charts of Europe (Iron Man 2, Knight & Day, The Expendables). German film titles start to make more frequent appearances once we get to the green group (e.g Vincent will Meer, Zeiten ändern Dich, Groupies bleiben nicht zum Frühstück), and there are also some big Hollywood films that have badly underperformed (The A-Team).

In France, the data shows less variation in both the total and opening weekend grosses than the other countries. The purple cluster contains a more films (8) than in any of the other countries or years looked at in this or the other posts. Six of these films are the same top 6 we saw in the UK, along with Les petits mouchoirs and L’arnacoeur. The red group looks at little lost, and could perhaps be included with the black cluster. Included in this group are films such as Iron Man 2, Knight & Day, Clash of the Titans, Sherlock Holmes, Robin Hood, and other Hollywood films that appear to have opened reasonably well, but which have perhaps underperformed in terms of their overall box office gross – hence the separation from the black cluster. The difference between the green and blue clusters in France is not clear-cut, and could realistically be placed within a single group. These groups contain a mixture of yet again failing Hollywood films (The A-Team, Knight & Day) and French films that become increasingly more frequent once we get to these last two groups. 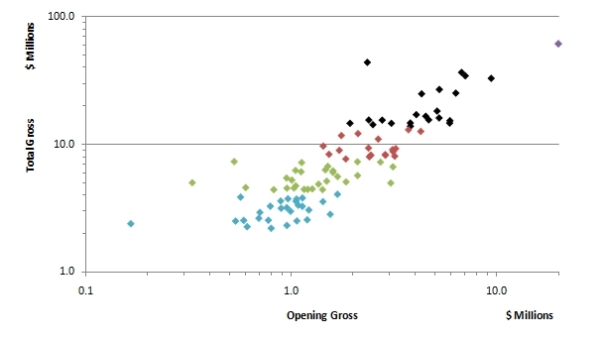 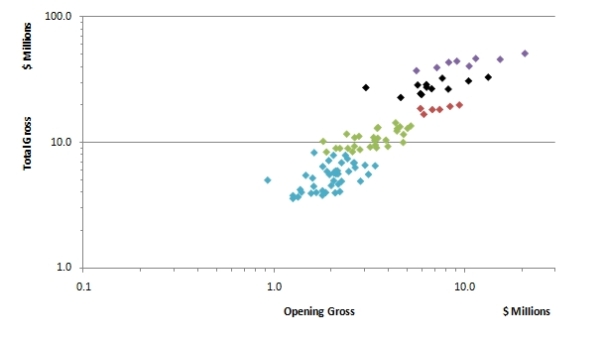 It is interesting to compare different European countries in this way because you can see where the variations in audience taste lie: Germans were apparently eager to watch the latest Resident Evil film, whereas the French and the British were not. There were less inclined to go and see Toy Story 3, unlike the French who enjoyed the film in large numbers and the British who made this film the highest grossing film of the year by some way.

You can also find the similarities: for example, everybody hated Letters to Juliet – it ranked 94th in Germany, 100th in the UK, and still hasn’t been released in France.