Recently I have been looking at the breakdown of the top 50 films at the US box office in each year from 1991 to 2010 by genre. I’ll have more to say on this topic in a couple of weeks, but I have looked at several different variables and have had to excise some aspects from the paper I was writing. This means I have some graphs left over – one of the most interesting of which is presented below. This boxplot shows the distribution of the ratio of the opening weekend gross to the total gross for the 1000 films in my sample. The box office data this graph is based on has been inflation adjusted to 2010 dollars. ‘Other’ includes genres that were too infrequent to be included separately, and is comprised of documentaries, musicals, war films, and westerns. (Actually this graph includes data from only 999 films, as one of the documentaries included in the category ‘other’ has no reported opening weekend gross). The summary statistics are given in Table 1 below. 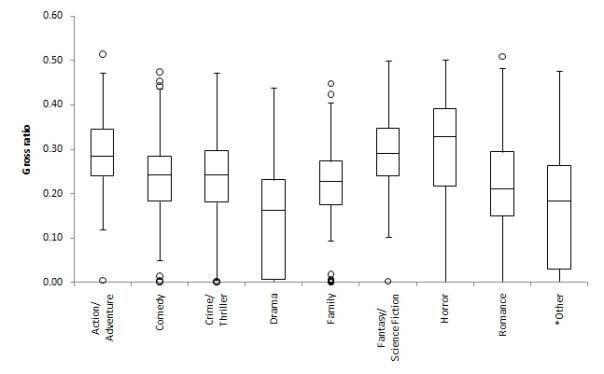 The overall median for 999 films is 0.2436; and so of the gross accumulated by these films, a quarter is taken in the opening weekends alone.

Three features stand out from this data:

The above graph is a very simple plot of a simple calculation performed on some easily obtained data, but we can immediately see how different genres find their way into the film market in the US. These patterns are even stronger when we look at box office data sorted by genre in more detail, as will become clear when I put up the full paper in a couple of weeks.