Given the fundamental role genre play sin the film industry and the extensive range of genre studies produced by film scholars it is surprising that there are so few pieces of research to track the box office performance of genres over time. One such study, which looks at the top 20 films at the US box office from 1967 to 2008 can be found here:

Given that the theory of national cinemas is as central to film studies as genre, it is also surprising that there have been no comparative studies looking at the box office performance of different genres in different countries. This post presents a quick and simple comparison of the top 50 films at the Australian, UK, ans US box office from 2008 to 2010, inclusive.

The total sample is 150 films for each country, and these were divided into nine genres: action/adventure, comedy, crime/thriller, drama, family, fantasy/science fiction, horror, romance, and other (which is mostly musicals and concert films, but also includes war films, westerns, and documentaries). The box office data was collected from Box Office Mojo, and for ease of comparison all values are in US dollars and have been adjusted for inflation to 2010. Films were ranked according to their box office gross, with the highest grossing film given a rank of 1, the second highest a rank of 2, and so on.

Tables 1 through 3 present the summary information for each country, including the number of films in each genre; the minimum, median, and maximum ranks of the box office grosses (no data is provided for very small classes); and the number of films from each genre in the top 10, top 25m top 50, and top 100 films.

Table 1 Genre frequency and box office ranks of the top 50 films in each year from 2008 to 2010, inclusive, at the Australian box office

Table 2 Genre frequency and box office ranks of the top 50 films in each year from 2008 to 2010, inclusive, at the United Kingdom box office

Table 3 Genre frequency and box office ranks of the top 50 films in each year from 2008 to 2010, inclusive, at the United States box office

From the information in the above tables, we can see that there is little difference between these three countries – not at all unsurprising given the dominance of Hollywood films in all three markets. In fact, these tables largely represent the same group of films in three different markets and so the comparisons between countries are pretty direct. The main results are:

The differences in the rankings of the four major genres – action/adventure, comedy, family, and fantasy/science fiction – can be seen clearly if we plot the cumulative proportion of films less than or equal to a rank 𝑥 (Figures 1 through 3).

Figure 1 Cumulative proportion by rank of four genres at the Australian box office, 2008 to 2010 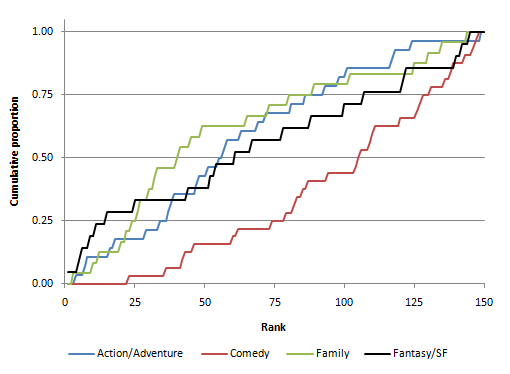 Figure 2 Cumulative proportion by rank of four genres at the UK box office, 2008 to 2010 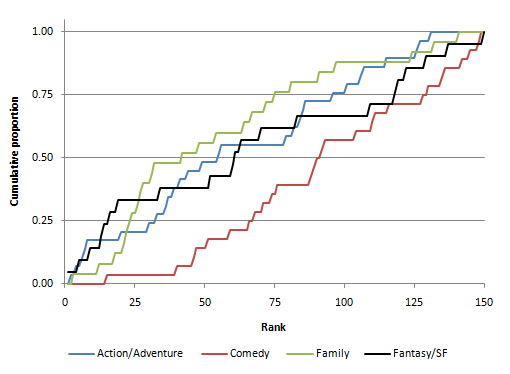 Figure 3 Cumulative proportion of by rank four genres at the US box office, 2008 to 2010

In all cases, it is clear that comedy performs substantially less well than the other three genres. Even though this is one of the most common genres, but it tends to rank much lower that the other genres. This does not necessarily mean that comedy are less profitable – the lower budgets for these films relative to special effects-heavy films of the other genres means that even though they tend to gross less they can still make their money. On the other, it may suggest that the market is saturated with comedy films and that too many films are chasing too small an audience. I am unaware of any research on this topic.

In Figure 3, we can see the high grossing action/adventure films that account for 5 of the top 10 films, whereas in Figures 1 and 2 this genre is not so dominant among the upper rankings. Fantasy/science fiction films occupy a high proportion of the highest grossing films in all three countries; Family films appear to do slightly less well at the high-end and slightly better at the low-end, but are concentrated more in the middle relative to these other genres. The four curves appear to converge where the rank is approximately 120, indicating that these genres are relatively evenly distributed at the end of the rankings. This does not appear to be the case for the other two graphs, where comedy remains distinct from the other genres.

Overall, we get the same patterns for audiences and their box office preferences irrespective of whether they live in Australia, the UK, or the US. Undoubtedly, this is in part attributable to the ability of global media empires such as Buena Vista International, Time-Warner, News Corporation, Viacom, etc. to shape a market. Although limited, the above results raise an interesting question regarding the nature of national cinemas: if the film markets in different countries are so similar does it make any sense to speak of discrete national cinemas rather than a single global cinema?

The fact that Australia, the UK, and the US are all culturally similar, English-speaking countries may contribute to the effects noted above, and we may find that in other countries, where the main language is not English, that different patterns emerge. However, I am sceptical on this point, and as soon as I have got some data to make the comparison I will post a follow-up.