The editing structure of Halloween (1978)

A few weeks ago I used the order structure matrix to describe the time series of shot lengths in Top Hat (see here). The matrix is a simple way of visualising the evolution of a film’s editing, and is based on whether a shot is greater than or less than the shots that precede it. The matrix is constructed by assigning a value of 1 when a shot (xs) is greater than or equal to a shot at xt, and a value of 0 when xs < xt. By representing 1s as black and 0s as white, we can plot this information and read off the editing structure of a film from left to right as dark columns represent groups longer takes and light columns clusters of short shots.

The order structure matrix for John Carpenter’s Halloween (1978) can be seen in Figure 1, and the data can be accessed here: Nick Redfern – Halloween (1978). The data set does not include the opening or closing credits, but does include narratively relevant titles that establish time, place, and date. 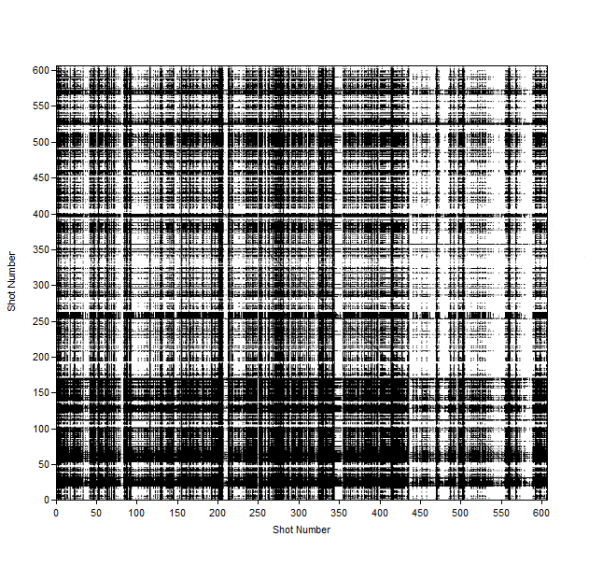 From the order structure matrix we can see that in the first part of the film there are numerous clusters of shorter takes. The opening of the film is generally quite slow until Michael Myers attacks the nurse int he car as he escapes, and this accounts for the first of these clusters at shot 35. The clusters of short takes are associated with the stabbing deaths in the film. For example, the white band covering shots 345-355 is the murder of the boyfriend in the kitchen. The strangling deaths tend to be much slower. However, not all the white columns are associated with scenes of violence. Many such clusters are the social interactions between Laurie, Annie, and Lynda as the walk home from school (shots 93-116) or when they talk on the phone (e.g. shots 220- 233).

The scenes featuring the adult male characters are edited differently. The sequences  in which Loomis searches for Michael are generally cut more slowly: the scene in which Loomis arrives at the Myers house and the window is broken by Michael in an effort to scare him off covers shots 202-208 and lasts for ~208 seconds. The interactions between Loomis and the Sheriff of Haddonfield are also cut slowly. The qualifier ‘adult’ is significant here, as the scenes featuring Tommy Doyle being bullied are cut quickly: the sequence of shot reverse shots of him being bullied at school begins at shot 74. This sequence is followed by Loomis searching for Michael which accounts for the dark column in shots 88 to 92. Taken with the sequence of the three girls walking home, in this early part of the film we have an alternating sequence of fast and slow cut scenes that switch from prey to predator.

The major feature that can be seen in Figure 1 is the abrupt change in editing that occurs at shot 437 when Michael Myers attacks Laurie. From this point on the editing is consistently quicker as Laurie escapes from the house and then is attacked by Michael in the closet. Within this extended violent sequence there are some longer shots, and as before these are associated with Loomis searching for Michael, though when he shoots Michael this is edited quickly. The film ends with a sequence much slower as Michael appears to be defeated and then has disappeared (shot 590-606). It will be interesting to see whether Halloween II (1981) being with a similar style as the narrative picks up from the point at which the original film ends.

It will also be interesting to discover if this type of editing pattern is consistent across the slasher film genre, with the sequences featuring the ‘final girl’ and the killer edited much more quickly.