Amongst the information available from the UK Film Council weekly box office archive is the 52-week rolling rank assigned to each weekend. This post looks at this data for the years 2002 to 2009, inclusive, and is presented in Figures 1 to 8 plotted against the week of release.the ranking of a week in this scheme is closely related to the performance of the film with the ranked as number one in terms of its weekend gross, and a large opening for just a single film can produce a week with a high-ranking (say 1 to 8), even if the other films on release that week performed much less spectacularly. As we shall see below, the peaks that occur in plotting the rolling rank against the number of the week generally occur with the release of blockbusters.

Some gaps occur in the graphs and this is due to missing data on the UK Film Council website. This is particularly unfortunate as many of these gaps appear to occur with what would be expected to be high-ranking weekends – the gap at week 46 in 2002 coincides with the release of Harry Potter and the Chamber of Secrets and week 21 in 2005 coincides with the release of Star Wars: Episode III – The Revenge of the Sith. There are also gaps in some years over the Christmas period because apparently no-one works at the UK Film Council over the holidays and they don’t bother to put the data in retrospectively once they get back in early January – which is fine, because it’s not like they’re the government agency responsible for collecting and disseminating data on the film industry in the UK or anything.

For 2002, we can see that for the early part of the year (weeks 1 to 8, mean = 10.4) the rankings are generally quite high, followed by second period of mostly mid rang-range rankings (weeks 9 to 19, mean = 28.3). From week 20 to week 32, the ranking of a week is either very high and associated with the release of a blockbuster(e.g Star Wars: Episode II – Attack of the Clones at week 20), or very low. Weeks 33 to 44 tend to be very low as summer turns to autumn and the schools reopen. After this it is a bit difficult to interpret due to the missing information for the opening weekend of the Harry Potter film, but the other peaks at the end of the year are for Die Another Day and Lord of the Rings: The Two Towers.

2003 is similar to 2002 in many respects: weeks 1 to 8 produce higher rankings, followed by a very slow period for weeks 9 to 20, with only a peak at week 20 for X-Men 2. The ups and downs of the summer are less extreme than in 2002, indicating overall a slightly more modest summer blockbuster season than the previous year, but The Matix Reloaded makes a strong showing at week 21. The high rankings in the late-autumn are for Finding Nemo, The Matrix Revolutions, and Lord of the Rings: The Return of the King. The regularity in the peaks being a couple of weeks apart indicates a clear pattern of the distance distributors and exhibitors leave between releases.

2004 again has an early strong showing followed by a leaner period with weeks ranked in the bottom half (i.e. 27 to 52). The summer blockbuster season produces very sharp peaks and troughs as Harry Potter and the Prisoner of Azkaban, Shrek 2, and Spiderman 2 follow one another – gain the gap between releases of 2 or 3 weeks should be noted. Very low rankings for the early autumn are followed by the later high-ranking releases of Shark Tale (week 42), Bridget Jones: The Edge of Reason (week 46), and The Incredibles (week 48). The christmas period produces much lower rankings in this year compared tot he others covered here, and the release of The Polar Express coincides with the ranking of 52 for the last week of the year. 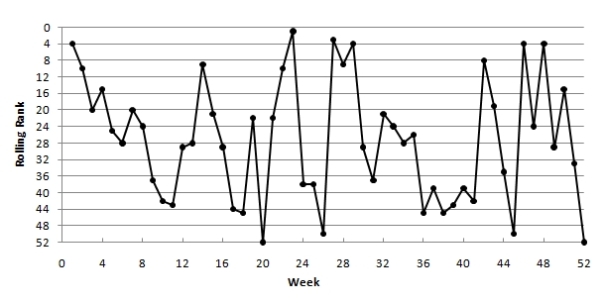 The poor christmas of 2004 is carried over into January of 2005, but as we have become used to the early part of the year generally produces weeks ranked above 26 followed the late-spring with weeks ranked below 26. The data for the summer blockbuster season is marred by the missing week, but War of the Worlds, Madagascar, and Fantastic Four all provide peaks – albeit generally lower than in 2004. Weeks 34 to 40 are consistently low in the rankings (mean = 43.4), but the end of year blockbusters Wallace and Gromit: The Curse of the Were-Rabbit, Harry Potter and the Goblet of Fire, and King Kong all pick up. The variation in weeks 51 and 52 may be due to the fact that cinemas are not open over christmas – in this year a Sunday – leading to low rankings as screenings are curtailed on Christmas Eve, Christmas Day, and Boxing Day.

The fact that everything in the UK is closed on Christmas Day is unique – in other countries it is a day of great socialising and the cinemas are open (Sherlock Holmes opened on 25 December 2009 in every territory except the UK, where it opened on Boxing Day (i.e. 26 December). A family outing to the cinema is for many a Christmas tradition, whereas in the uK we tend to talk about must-see television shows at Christmas – the phenomenon of Morecambe and Wise in the 1970s and the big soap stories (e.g. Den and Angie in Eastenders) being prime examples of this. It is also a recent development – until the early 1970s, football matches used to be played on Christmas Day in the UK. It is important to bear this in mind when looking at the rankings for the weeks at the end of the year, because we see patterns in the UK box office we would not expect to find anywhere else.

2006 follows similar patterns to those outlined above, with several blockbusters producing high-ranking weeks – Ice Age II (week 14), The Da Vinci Code and X-Men: The Last Stand (weeks 20 and 21, respectively), and Pirates of the Caribbean 2: Dead Man’s Chest (week 27). What really stands out though is the decline after the opening weekend of Pirates, which goes on right through the summer – evidently Snakes on a Plane and You, Me, and Dupree did not entice audiences away from the British summer time in large numbers. Casino Royale (week 46) is as ever dependable as a Bond film in producing a number one ranking.

2007 is filled with weekends that achieved high-rankings – and it must be remembered that because of the rolling rank covers a 52 week period, this is in part due to the generally poor performance of 2006. But it is also a year notable for a series of very big blockbusters spaced only a week apart: Spiderman 3 (week 18), Pirates of the Caribbean 3: At World’s End (week 21), Shrek the Third (week 26), Harry Potter and the Order of the Phoenix (week 28), and The Simpsons (week 30). Also notable is the absence of any high-ranking weekends in the late-autumn, and this may be due to the release of the Harry Potter film in the summer where earlier films in the franchise were release towards the end of October and in early November.

2008 combines features we have encountered in all the different years looked at so far: high rankings in weeks 1 to 8, low rankings for weeks 9 to 20 (with a half-term peak for Horton Hears a Who), followed by a series of summer blockbusters reminiscent of 2007. Indiana Jones and the Kingdom of the Crystal Skull (week 21) and Sex and the City (week 22) pull of high rankings in consecutive weeks, and this may be due to their appeal to different audiences as they do not follow the pattern seen in 2004 and 2007 of a low-ranking week between two peaks. It was clearly another good summer for blockbusters: Hancock (week 27), Mamma Mia! (week 28), and The Dark Knight (week 30), and another quiet autumn. After 2007, the end of year blockbusters returned with High School Musical 3 (week 43) and – of course – James Bond in Quantum of Solace (week 44), but the Christmas period shows a notable drop.

2009 seems to be a bit middling – except for week 7, which saw the release of Bolt – the weekly ranking is consistently somewhere in the middle (in fact, the mean rank is 22.7). Harry Potter and the Half Blood Prince brings a peak to the summer at week 29, but generally the rankings are much lower than for preceding years. The quiet autumn is disturbed by Twilight: New Moon at week 47, but otherwise nothing stands out. The recession is a likely factor here as audiences no longer have the disposable income of earlier years and so have largely decided to stay home – the peaks for Harry Potter and Twilight indicate that audiences will turn out to see the biggest film of the year or the next instalment in the series that have been following even in times of financial hardship. The audience is perhaps being more cautious with its cash, and it will be interesting to compare 2009 and with 2010 to see if a similar pattern emerges.

Of course, what happened in early 2010 was that Avatar steamrollered everything in its sight and became the highest grossing film in the history of British cinema …

Some general trends can be identified: